Speedscale can be configured to redact sensitive data and personally indentifiable information (PII) from traffic via it's data loss preventiion (DLP) features. This redaction happens before data leaves your network, preventing Speedscale from seeing the data at all. However, the overall shape or structure of the data is retained in order to facilitate useful testing against systems.

Speedscale's DLP engine is focused mostly on HTTP traffic at this time. If you find that this is inadequate for your needs, get in touch with us on the community Slack to discuss your specific requirements.

Speedscale's DLP engine orks by inspecting key/value elements in recorded traffic, removing the value from keys considered to be sensitive and instead replacing it with a placeholder string -REDACTED-. This redaction only applies to data that can be coerced as a string value; numerics, booleans, etc. are not supported at this time.

To see the keys that are redacted by default, you may view the Speedscale-maintained standard DLP configuration in the main UI. Or via the command line using speedctl:

DLP features are NOT enabled by default and must be turned on and configured to match your specific needs. Use the following speedctl command, which will apply configuration to your operator installation that enable DLP features:

The above command is interactive and will present you with the option to select a specific installation connected to your Speedscale account.

If you are installing the Speedscale operator via the Helm chart, it is possible to enable DLP at install time. When running helm install, use the following additional argument to the command:

Manually enabling DLP as described below requires access and permissions to edit ConfigMaps in your kubernetes cluster.

Using speedctl as previously shown is the recommended method for enabling DLP. However, it is still possible to enable DLP manually. In the speedscale-operator ConfigMap located in the speedscale namespace, set the key WITH_DLP: "true":

After patching the ConfigMap, the operator must be restarted in order to receive the change:

DLP configurations consist of a set of redaction rules or instructions that will be applied to specific fields or attributes of recorded traffic. Each configuration follows the same structure:

The entries key contains a mapping of protocol to a list of rules to be applied only for that protocol. For example, a configuration that redacts the values for HTTP headers Authorization and X-Auth-Token:

To create a new DLP configuration, navigate to the DLP Rules section listed on the UI sidebar (shown below). 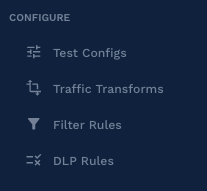 From this screen, you will be presented with a simple editor that allows you to view existing configurations, make copies, or create new ones.

Alternatively, if you prefer to create or edit DLP configuration in your own editor, you can use speedctl to manage obtaining and uploading them:

Some redaction behavior for HTTP could differ from your expectations, particularly with JSON data, where blocked keys will have values that are complex data types like a JSON array or object. In these cases, the number of entries and the sub-keys will remain, but each value will be set to -REDACTED-.

For example, with a nested JSON object:

A configuration setting to redact token will result in the following:

Similarly, an array or list value behaves the same way:

Redacting individual or specific elements in an array or list is unsupported at this time.

Recorded traffic is viewable directly from the Speedscale traffic viewer and can be used to verify if DLP configurations are working as expected. 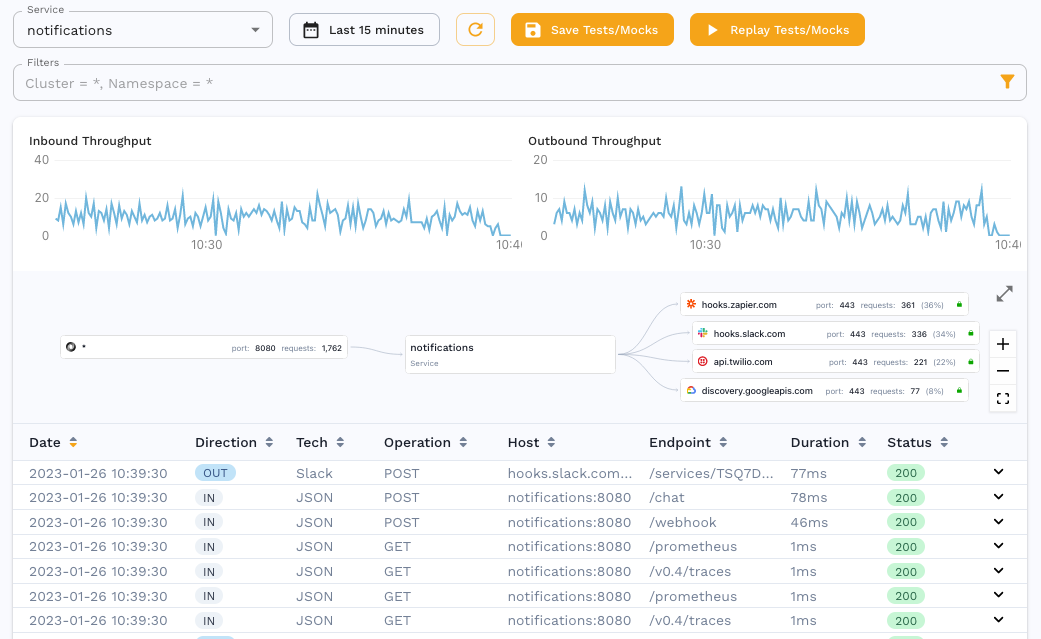 Click on one of the rows in the traffic list to expand and view the request, response, and metadata associated with the transaction. For example, the following transaction contains an Authorization header with a potentially sensitive JWT bearer token as its value.

With DLP enabled and configured to redact the Authorization header, the recorded transaction will insted be shown like the following:

Note, that it is still possible to manipulate redacted data during a replay using traffic transforms. However, we may not want to ever capture or record this data, or even let it leave your cluster, which is what DLP provides.

Other than the standard DLP configuration, which is relatively trivial, there are no predefined behaviors configured since DLP policies are typically organization specific. The following are some configuration examples of how DLP can be configured to fit your specific needs.

Amazon KMS provides keys that can be used to encrypt or digitally sign data. If your application uses KMS directly, redacting potentially sensitive information in KMS requests and responses may be desirable. The following DLP configuration will scrub both encrypted and decrypted data present in observed KMS traffic (as well as any Authorization header):

Refer to the KMS documentation for more information about data that you may wish to have redacted.